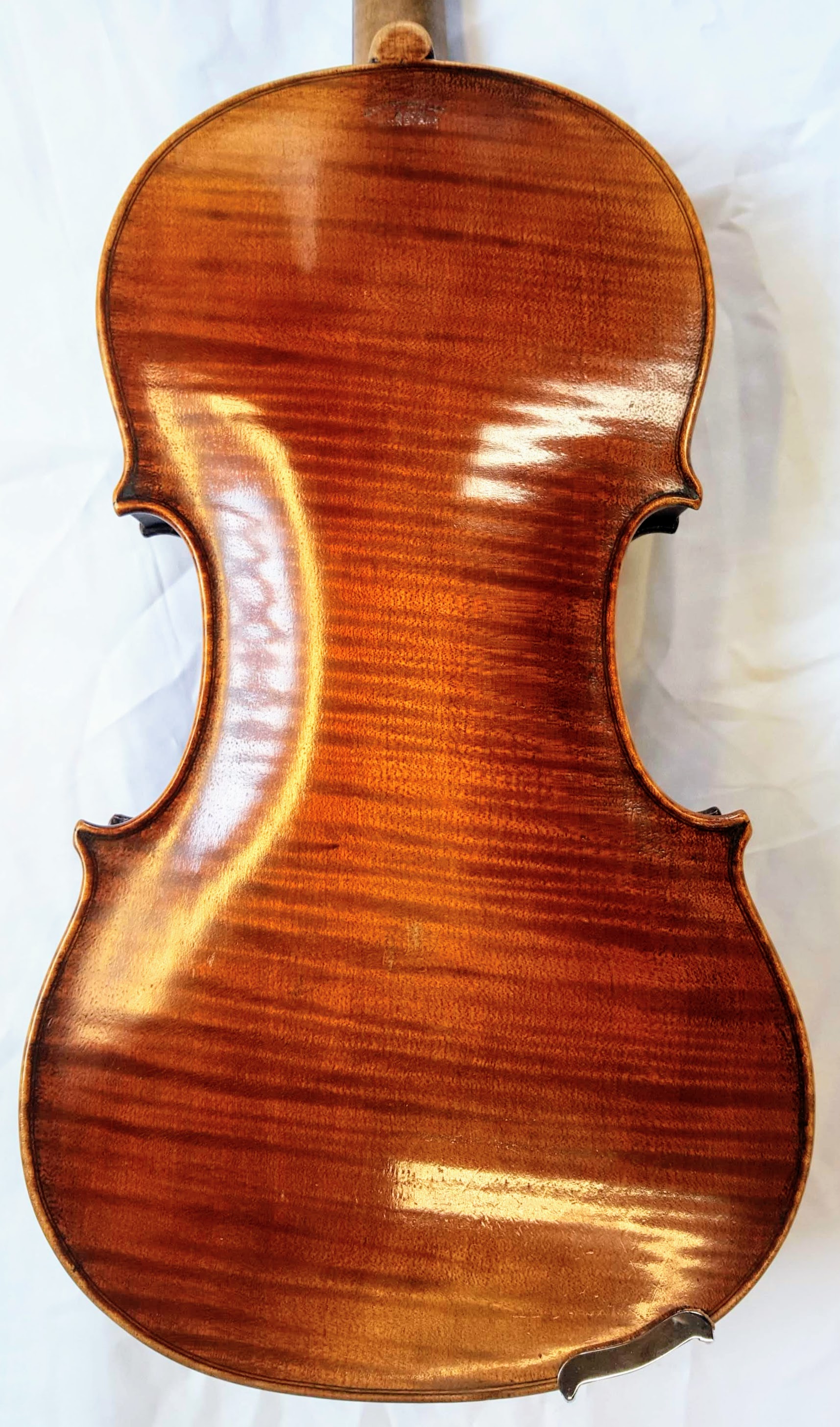 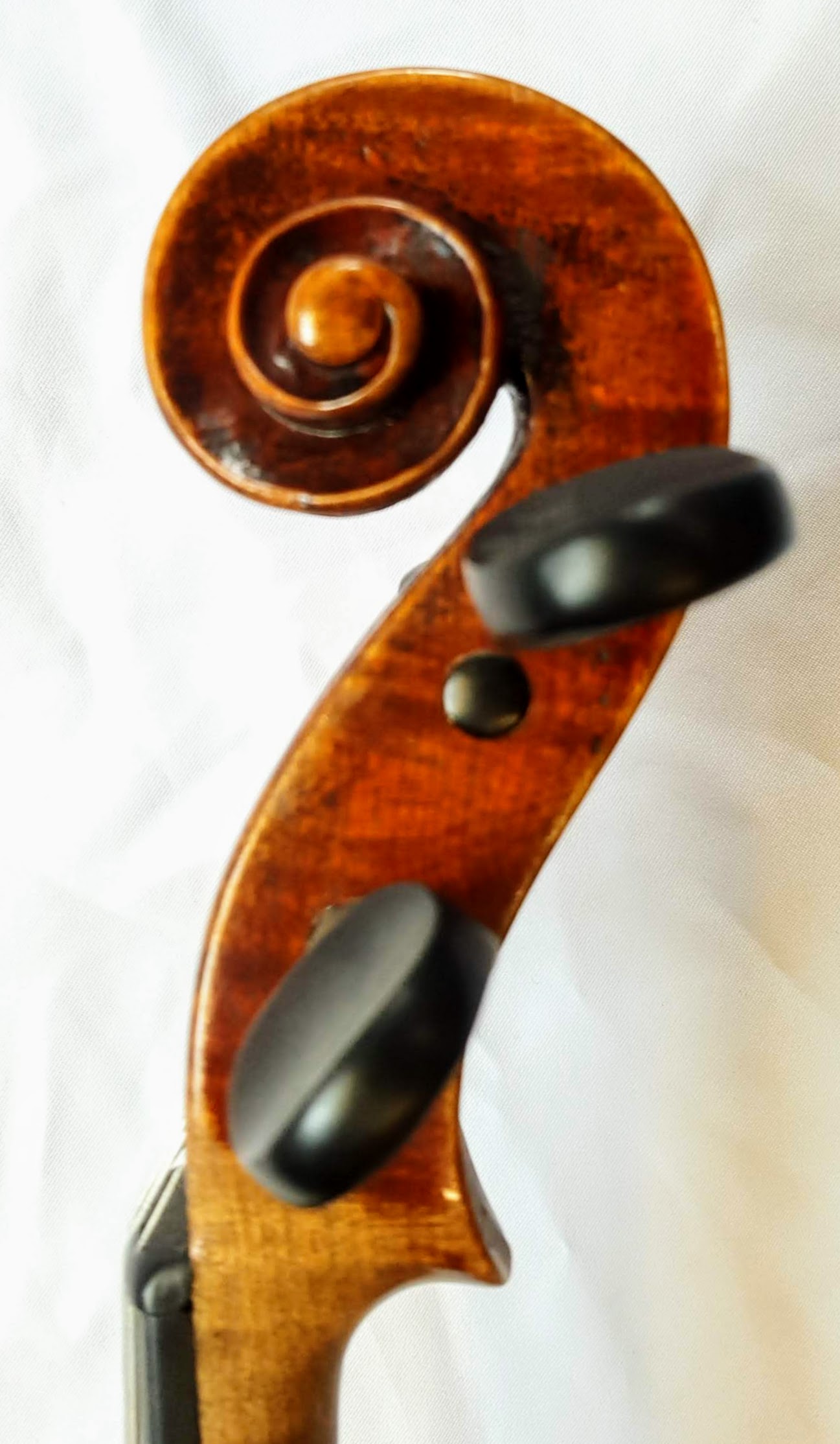 One piece back. Ernest Kohler, Edinburgh Scotland. This violin has an exceptionally beautiful sound.  With its clear, resonant and dark voice which has matured as the violin has aged. In terms of its fullness and character, the sound can hold its own against many other full-sized instruments. Beautiful tone woods, especially the attractive one-piece flamed back, shape the identity of this instrument which we offer in excellent condition.  It is ready to be played immediately after having being carefully worked over by Phil Whitehead.
You are welcome to visit 'The String Workshop' in Mairangi Bay and "Try before you buy".

The earliest mention of Ernest Kohler (Abt. 1777 – 1857) occurs on the occasion of his marriage in 24 th August 1817 at Cannongate Church, Edinburgh. The entry reads:

From a later census, Ernest (or perhaps Frederick Ernest according to his civil death certificate) was born in Brunswick, Germany starts to appear in the Post Office directory from 1823 onwards:

He moved to 55 St Mary’s wynd in 1825 and 29 Niddry Street in 1827 before moving to various addresses on High Street from 1828 until settling at 187 High Street in the early 1850’s. His business seems to be string making as there is no listing for him under the Musical Instrument Makers and Music Sellers category in the 1852 Post Office Directory.

The 1851 census shows that his youngest son, Phillip is now working with his father as a string maker, whilst his older brother Ernest is a metals processor. Earnest’s death in 1857 allows us to see a little of what had gone on in the past. His will dated 1851 states that his estate is divided between Philip and Elizabeth as Ernest had already been provided for earlier. An extract from his will reads:

One thing to note from this is that Philip was employed by his father as a workman, and this does not indicate that they worked as a partnership. In the Post Office directories immediately following his death Ernest is still listed as a string maker but operating from Bridge Street. Philip is probably trading on his father’s name and reputation and this is the case from 1858-60, however in the 1861 directory for the first time E Kohler & Son is listed. Philip seems to have, remarkably, set up in partnership with his late father! A very wise business move that cements his father’s past legacy to his own future success.

In 1856, a year before his father’s death, Philip had married Catherine Slater and had issue as follows:

Philip appears to have been a key to the business’ expansion and success, as in the 1869 Post Office directory, E Kohler & Son appears for the first time in the Profession and Trades Directory section under the ‘Music Instrument Makers and Music Sellers’ category. Although marked with an Asterix indicating a Music seller, this could also be interpreted as being instrument makers.

As well as selling sheet music, Philip also used the company to publish music and from 1881 produced a series of small booklets of dance music. This was later republished in a 3-volume collection titled ‘The Kohler Repository of Dance Music’ in 1885.

A magazine called the Musical Treasury was also published being issued monthly, which according to the title of issue 77, dated October 1885 would have started around 1878. The company was occupying 2 adjacent properties by now, 11 and 12 Bridge Street and around 1897 moved to 101 Leith Street.

On Philip’s death in 1900 the business passed to his only surviving son Frederick Ernest Kohler. He married, in 1897, quite late in life, a Robertson MacGregor and only had a single son:

The business under Frederick Ernest senior appears to have built on its earlier success. An indication of this is that it starts to take-out full-page adverts in the trade directories. The one from the 1910 MacDonald’s Scottish Directory implies they are still manufacturing as well as importing instruments. It shows a range of violins priced from 7 shillings and 6 pence all the way through to 10 pounds!

Fredrick Ernest Kohler junior was called up for service during World War 1, joining the Royal Garrison Artillery receiving his commission as 2nd Lieutenant on 1 st October 1917 but must have received some injury as he was invalided out and received the Silver War Badge on 23 rd August 1919. His youthful influence on the business starts to be felt in the 1920’s when the adverts start referring to phonographs, gramophones, records, needles and discs for sale.

On the death of Frederick Ernest senior in 1931, Frederick Ernest junior took over the business, and developed the recorded music sales even further. An entry in the Post Office Directory for 1933 tells us of the firm:

By 1937 the main shop had moved to 5 Blenheim Place, and appears in the MacDonald’s Trade Directory of 1942-43. They may have continued trading later, but Frederick Ernest Kohler junior’s death is recorded in Alnwick, Northumberland in 1959 so he had obviously retired from the business. It is not known if it stayed in the family hands or was sold or closed at this stage.